Back in the circuit again … (aka: You can never do too many circuits)

Well, life has taken an interesting turn since I passed my PPL test last month. Specifically, I have taken a redundancy package from Suncorp after 5 years service there, and as of last Friday I am officially unemployed!

A strange feeling. I’ve never been out of work since leaving university.

In actual fact, I’m straight back on to the job market and have reasonable expectations of picking something up in the next few months. But, one of the side benefits of a little time off – within prudent budgetary limits, of course – is I might get a little more flying in!

So I kicked off my sabbatical proper with an hour in the Bankstown circuit today in one of my old warhorse favourite aircraft, UFY.

Today’s objective was simple. It’s been a little over a month since I last flew an aircraft, and I have plans to take a friend up in a couple of weeks time, armed (hopefully) with my new PPL. So I felt in need of a little brushing up on basic technique, and of course now being a PPL, I need to maintain my currency for passenger flying by making a minimum of 3 takeoffs and 3 landings in the 90 days immediately before taking anyone with me.

Takeoffs were to the east this morning on runway 11R, with information Golf and a light variable breeze. Despite 4 weeks out and a rather turbulent frame of mind due to my job situation, I went through the routine and mantra of my pre-fligh, taxying, run-up and pre-takeoff checks, and soon found myself at holding point Y2 for 11 right. Clearance duly received, I opened the throttle and was away.

I am getting better – slowly, incrementally better! How do I know this? Because today I remembered to use a bit of right rudder pedal pressure from the very first takeoff, thus avoiding the fearsome drift to the left I experienced on my last circuits outing. Runway alignment today was maintained consistently, thank goodness.

What was not pleasing – but perhaps not surprising – were my initial landings. The first four were – well – dodgy. Not unsafe dodgy, but poor technique dodgy. It took me until the 5th of my 7 circuits to execute a decent landing. 6 and 7 were also OK, once I hit my stride. (This was interspersed with a go-around on my 4th approach for landing, the tower having neglected to give me landing clearance by the time I was on very late final).

I think I learned something though. My landings improved when I really narrowed my focus on the runway threshold and the piano keys ahead of me, and really concentrated on nailing my approach speed, using my feet actively to maintain runway alignment, and lifting my eyes to the far end of the runway after I was over the threshold. For some reason, holding off in the landing flare was a bit of a challenge for me today and it took me several goes to really get it right.

Ah well, all good. As I’ve noted many times – any any good experienced flyer will also tell you – having a new PPL is basically having a license to learn. I’m under no illusions as to my ability and skills. Yes, I can fly a light aircraft competently and safely, but if there’s 100 steps between being a novice and a master, I reckon I’m on about step 5.

On the 7th circuit, having achieved 2 decent landings, I decided to call it a day and requested a landing on the north side of the airport – if possible – to minimise taxying time. Tower cleared me to land on the big runway (runway 11C, or one one centre) and I made my 3rd decent landing of the day. Taxying back and shutting down, I was well pleased with the session and very, very happy to be back to doing what I love. Truly, any more than a month without flying and I get jumpy.

Something unusual back at the club

Having parked UFY on the flight line, I walked back to the club and was pleased to see this rather lovely Tiger Moth parked out the front of the Schofields clubhouse. 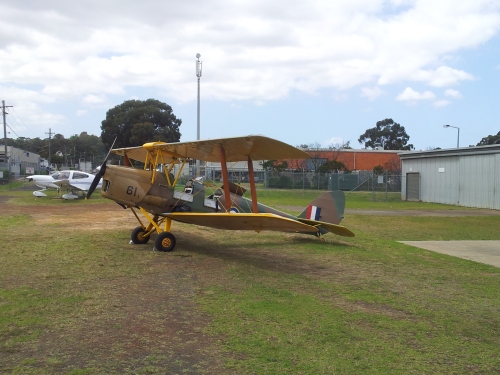 I don’t know whose aircraft this is, or where they were off to today, but it’s not every day you see one of these classic aeroplanes. Talk about a serious blast from the past. I gawked at this lovely machine for several minutes, marvelling at the basic simplicity of its “instrument panel” as shown below:

They sure don’t make ’em like they used to.

Progress of my license

Before writing this blog post, I called CASA to check on the progress of my license. I’m told my application is on the top of the pile, and if (as is highly likely) they get to it tomorrow, they should be posting my license before the end of the week. I’m as nervous as a cat on a hot tin roof – I can’t wait to get the piece of paper in my hand!

This entry was posted in Aviation, Flying, Learning to fly, MidLifePilot and tagged circuits, go-arounds, learning to fly, ppl, progress. Bookmark the permalink.

7 responses to “Back in the circuit again … (aka: You can never do too many circuits)”